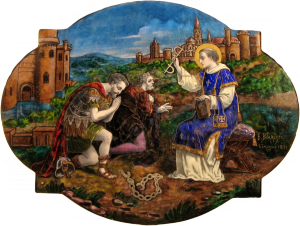 The popular devotion to Saint Leonard continued to grow throughout Chrisendom, particularly after the publication of the story of his life in « Vita ».during the 11th century. In the 12th century, after the crusades, Saint Leonard was the object of devotion by numerous crusaders who had suffered imprisonment. They propagated his veneration among their entourage as « the liberator of prisoners ».

Bohémond d’Antioch, the most famous among them, came in pilgrimage to the tomb of Saint Leonard, after his liberation from Saracen prisons.

After him, Richard the Lionheart, Charles V11 King of France and the Prince of Condé, came in pilgrimage to the tomb of Saint Leonard

Saint Leonard is also invoked for illnesses, infirmities, childbirth or sterility. The Ostensions are the result of the intercession requested of Saint Leonard during the « Mal des Ardents » (the malady of the fevered) in1094.

Anne of Austria, Queen of France, had a relic of Saint Leonard brought to her to ensure the safe birth of Louis X1V and subsequently made a pilgrimage of thanksgiving to the church of Saint Leonard at Croissy sur Seine.

The special symbols of Saint Leonard, which distinguish him from all other saints, are a chain and shackles. These are to be seen in the Collegiate Church above his tomb and the shackles figure in the Coat of Arms of the town