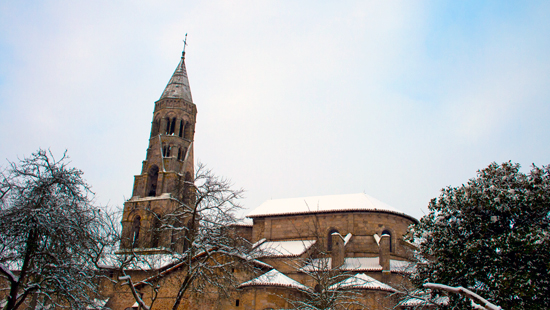 In the 11th century the holy reputation of Leonard benefitted from the unfailing support of Jourdain de Larron, the lay provost of the community of clerics which was based close to the saint’s tomb, and who became Bishop of Limoges. He brought the « Vita » to the attention of a great number of people, which resulted in the pilgrimage to Noblat, taking on an even greater importance.

The construction of the Collegiate Church became a necessity so that the relics of Saint Leonard could be properly installed and protected in a place which was commensurate with the dignity and reputation of the saint, and big enough to accomodate all of the faithful..

The Nave has kept its thick walls with their massive butresses. The openings in the arches, mark the 11th century. The transept is surmounted at the crossing by an octagonal tower on a cupola which lights the interior of the church with its eight windows and is from the same era.. 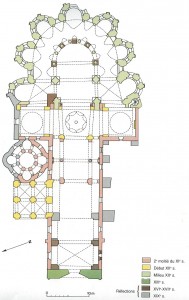 It was at the beginning of the 12th century, the community of canons, who managed the church and the pilgrimages, constructed the superb bell tower of 7 floors, with a spire rising to 52 meters : there are 3 floors which have a square layout with a narthex opened by large arcades, separated in four vaulted groin spans, by a central pillar. In rounded arch or pointed arch, these bays indicate the 12th century . On the fourth floor the gables thus allow the passage from the square floor plan to the octagonal floor plan and ones vision is raised, almost without realising it to the summit by following the pure lines of the of the stone spire.

The pilgrimage to Santiago de Compostella, where the tomb of Saint James the Apostle is to be found, had become more and more important. The church had to become a real welcoming centre for pilgrims who came « to visit the holy body of the blessed confessor Leonard whose powerful intercession has liberated numerous thousands of prisoners from their jails. Their iron chains, more barbarous than one can imagine, are hung around the basilica, to the right, to the left, inside and outside, as witnesses of his remarkble miracles » . This publicity which appeared in the pilgrims guide, written around 1140, brought about the construction of the chancel. It is vast with a wide ambulatory in which 7 radiating chapels are found.

This replaced the original chancel, of which we know nothing, around 1150. One is drawn to admire tirelessly the majesty of the terraced roofs and permit oneself to be impregnated by the light diffused in the interior by the main chapel windows or admire the Limousin style of architecture with miniature columns, stone cores and finely sculpted capitals.

The Collegiate Church, thus enlarged, would never be modified. Only the Gothic main door at the west end of the church was added in the 13th century and really completed the building. Chains and shackles and commorative plaques of all sorts were hung in the interior and around the main door. It is still possible to see the nails on which they were hung.

In the 17th century, in order to avoid the chancel falling down, supporting arches were added on the exterior and the fine rounded columns which surround the ambulatory, were consolidated in the interior.

Finally, around 1880, some major restoration work gave the bell tower, once more, the majesty of all its openings, which had been walled up and reconstructed the chapel of the holy sepulchre in its rotunda form. A small bell tower was removed from the lantern tower.

One can venerate the relics of Saint Leonard which have been placed, since the 15th century, in a wrought iron cage above the high altar, or in the south transept near the tomb over which hangs a heavy prisoner’s chain.