A stage on the pilgrimage route to Santiago de Compostella 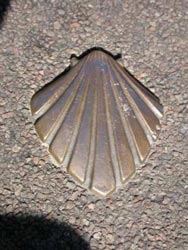 In the 9th century, in the Kingdom of Asturias, in the northwest of the Iberian Peninsula, was found the only territory which escaped the domination of the Moors. To this humble province came the incredible news of the discovery of the body of Saint James the Apostle (in Spanish Santiago).

According to legend, the Apostle had brought the gospel to Spain then had returned to Judea. When he died, his disciples brought his body , by sea to IREA FLAVIA.

The body of Saint James was rediscovered thanks to a mysterious star, and Compostella rapidly became a place of great veneration leading to the building of the Cathedral of Santiago de Compostella which became the site of one of the greatest pilgrimages in Christendom.

Four main routes are followed by European pilgrims. They meet at PUENTA LA REINA, in Spain in order to follow the « Camino Francese » (the French Route) to Santiago de Compostella. One of these four routes, the VIA LEMOVICENSIS, goes via Vézelay, Saint-Léonard-de-Noblat and Perigueux.

This pilgrimage was particularly popular in the Middle Ages, as it was in those times when Christians sought out the miraculous and were attracted to seek out a « Heavenly Jerusalem ». From the 16th century onwards, there was a decline which became more and more pronounced until recent times.

Nowadays,the need for spirituality and the development of European exchange, has encouraged a renewal of the spirit of pilgrimage and particularly the pilgrimage to Santiago de Compostella. The ancient pilgrimage routes are once again being followed by an increasing number of pilgrims. These pilgrims who are known as « Jacquets » are coming through Saint-L éonard-de-Noblat in progressively greater numbers, and stop at the Collegiate Church, to venerate the relics of the hermit Saint, Patron Saint of prisoners.

The Collegiate Church of Saint Leonard has been classified in recent years as a WORLD HERITAGE SITE by UNESCO by virtue of being an integral part of the pilgrimage routes to Santiago de Compostella.

[To prepare to accomodate this influx of pilgrims, a refuge dedicated to Saint Leonard was created in 2005 close to the Collegiate Church. It has comfortable accomodation for eight people and its capacity will increase in the future.
To gain access to the refuge, contact the Tourist Office, Place de Champ de Mars, 87400, Saint-Léonard-de-Noblat, tel. +33 (0) 5 55 56 25 06 | otsi@ccnoblat.fr | http://www.tourisme-noblat.fr ]