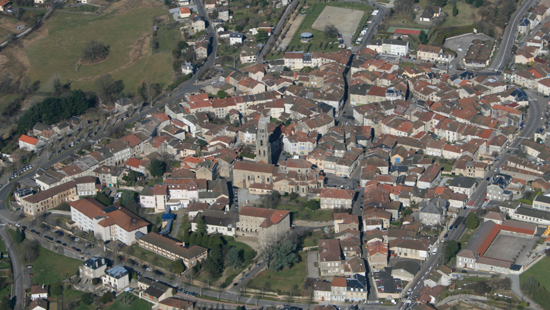 Saint-Léonard-de-Noblat is a small Limousin town, the main centre of a canton of 5000 inhabitants, 20 minutes by road from the regional capital, Limoges. It is a member of the tourist network « The Most Beautiful Detours in France ». The town’s rich architectural patrimony, its priviledged environment and its multiple services, make it a pleasant town to live in. When you are invited to « complete your entrance » (chabbatz d’entrar—the Occitan welcome), it means that you cross the threshold into your host’s home.

Founded beside an ancient route, the mediaeval town owes its fame and its development to the cult of Saint Leonard, a legendary hermit whose tomb encouraged devotees who venerated him, to make the town a place of pilgrimage as well as a major staging post on the pilgrimage route to Santiago de Compostella, which has been classified as a World Heritage Site by UNESCO.

Thanks to its rich history, Saint-Léonard-de-Noblat has kept its traditional festivals and a prestigious patrimony. The bell tower of its Collegiate Church, which is classified as an historical monument, is a remarkable example of Romanic architecture in the Limousin. However it is the entire town which invites one to have an architectural stroll through time.
The villages of the surrounding countryside demonstrate an authentic rural patrimony which is enhanced through the network known as « Land of Art, History, Mountains and Dams »

These villages nestle in the heart of pastureland where Limousin cattle are raised and bring prosperity to the region. This breed of cattle has won prizes for the quality of its meat throughout the World (from Paris to Chicago to Sydney).With pride in its history, its fortunate environment and of its know-how, in such industries as : leather production, forestry and particularly the production of first class Limoges porcelaine, Saint-Léonard-de-Noblat gives visitors much to discover. As far as gastronomy is concerned, you can discover flavours which are authentic or even forgotten. Massepain and preserved plums, confirm this fact, as well as chestnut cakes, trout, beef and galetous. These products can be easily found from local producers on their stalls at local markets on Saturday mornings and on the first Monday of each month.

Besides all of these delicious specialities, the Occitan language, will warm the heart of all lovers of tradition. Traditional music accompanies the nocturnal markets during the summer. These heart warming moments encourage good contacts between the inhabitants and visitors, right through to the Christmas market in the middle of winter. The very active life of local associations creates numerous events. Throughout the year exhibitions, concerts, conferences, shows and dances mark the life of the « Miaulétous » (the name given to those born in Saint-Léonard). The historic centre particularly lends itself to these events. It is very pleasant to stroll through the narrow streets or participate in the outdoor cinema presentations.

Among well known inhabitants, are Raymond Poulidor, a great cycling champion, known particularly for his remarkable performances in the Tour de France, and Louis-Joseph Gay Lussac (1778-1850), a famous chemical researcher, among whose exploits was to fly to 7000 meters altitude in a balloon, in order to verify one of his theories, which was that gravity varies with altitude. Saint-Léonard-de-Noblat dominates the valley of the river Vienne which is a paradise for fishermen especially trout as well as many other varieties of fresh water fish, and for those who love unspoiled nature. A trip through the gorges of the Vienne in a train drawn by a steam engine, is an experience not to be missed.

The Historail museum tells the story of the railways and the recently restored Moulin du Got, demonstrates how a water driven papermill worked 500 years ago in the production of quality paper.

There are many local festivities which mark the life of the city, the QUINTAINE, the OSTENSIONS , the celebration of the producers of Limousin beef in the DAYS OF LIMOUSIN BEEF , and the fairground during the feast of QUASIMODO.

Saint-Léonard-de-Noblat is a town which more than merits a visit for it does not rely only on its past, since it is an active place, a place where everyone can enjoy life. Thanks to the number of public and private facilities and the support offered to economic development as well as the involvement in associations of all kinds, the inhabitants look resolutely towards the future.

About the saint & the town :

About the city & its surroundings : 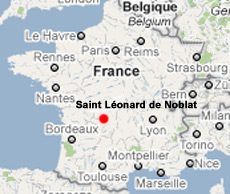